The Story of Weldan Pond 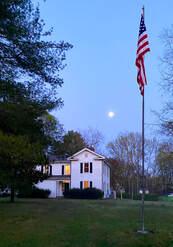 The Homeplace, built in 1890, as it appears in 2020.
Weldan Pond was a dream of the Wells family.  When Thomas "Budd" and Effie Wells discovered it in 1920, it became home, an idyllic farm in rural Dinwiddie County where they and their extended family could grow and prosper.  And their new home had what they needed - land to work and a house ready for a growing family.

Eventually, the farm house, built in 1890, housed Thomas and Effie Wells, their six children (Mary, Mildred, Becky, Virginia, Ethel, and John - all born in the house), and three of Thomas' siblings, Ela, O.C., and Horace (Beeba),  It was a crowded place but it was also a place where the extended family could work, farm, and take care of one another.  A Homeplace in every sense of the word.

Ethel Wells at about 16
Then in 1985, the family converted the old barn to a full service restaurant owned and operated by Ethel Wells Daniel and her husband William.  The demands of a  restaurant soon overwhelmed the time needed for multiple businesses and soon the Homeplace Restaurant became the family focus.  Nearly everyone in Dinwiddie as well as hundreds of travelers on I-85 discovered and loved the Homeplace.  It could have been Ethel’s rolls and pies made from scratch every morning.  OR it might have been William’s friendly ‘never met a stranger’ approach to the many people coming to the Homeplace.  Perhaps it was the sheer beauty of the setting.  But all three kept people coming in to eat with the Daniels for over 20 years.  Sadly, age and the realities of running a 24/7 type business became too much.  In spite of the extraordinary help of their son, Tom Daniel who ran the business for several years when Mrs. Daniel no longer could, the Homeplace Restaurant finally closed.